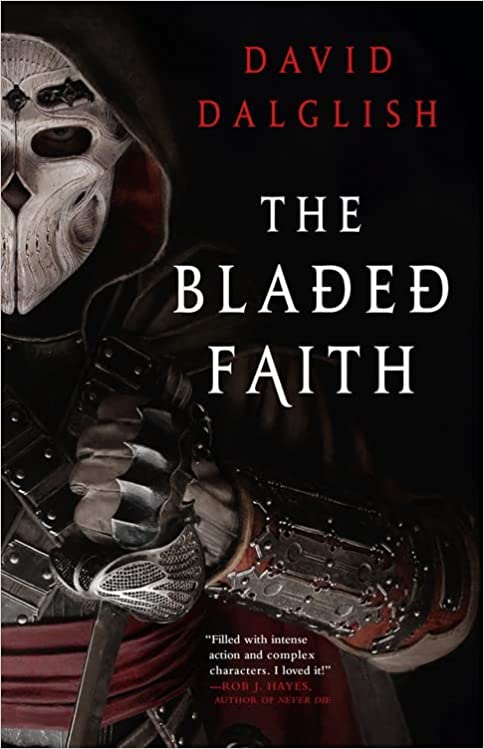 A usurped prince prepares to take up the mantel of a deadly assassin and reclaim his kingdom, his people, and his slain gods in this epic fantasy from a USA Today bestselling author.

The Bladed Faith is the first in David Dalgishes’ new series, Vagrant Gods. Dalglish, who has proven himself a master of action over the last several years (and is fresh off the phenomenal finale of his last series, The Keepers) has managed to publish yet another fascinating fantasy series. I came for the amazing cover and intriguing synopsis and stayed for the fantastic fight sequences, intriguing storyline, and compelling characters.

The Keepers was my first Dalglish read, and ever since I have considered the author to be a master of action scenes – both in quantity and quality. I point out the “quantity” because, to me, that is so important. Part of the reason I love great fight scenes is due to the fact that, in my opinion, if done correctly they make the pacing so much better. And Dalglish does it right. The buildup, the tension, the violence, the after effects; it all contributes to the rhythm of the narrative that I enjoy best. One that is fast and furious.

Of course, the quality is important, also, and this is another area where the author always shines. The detail and descriptions are on point, and so much emotion is brought into play. On the surface these scenes are violent and bloody, often brutal, but the reader also gets ongoing internal monologue from the characters, which I really enjoy. As a reader, I want to know what is going on in the minds of the characters, especially when they are face-to-face with an enemy. This is when emotions are highest, and I love seeing the characters show those emotions while demonstrating their fighting skills.

Of course, none of that would matter if I did not care about the characters. This is another strong suit that the author demonstrates: the ability to make the reader give a damn. Dalglish accomplishes this by developing characters with strong motives. We get that in these characters, as well; vengeance, love, hate, and affecting change are all reasons that are explored in the pages of The Bladed Faith. And they are all character motivations I love to read about.

The storyline was really intriguing, as well, and I love how many moving parts there are. The more components a plot has, the more opportunity for an author to add levels of drama. Dalglish does a great job using of those different elements to keep things interesting.

One small aspect I noticed is that I think in some of the in-between developmental times, the story feels a little rushed. This is kind of nit-picky, as everything is really well put together for the most part. It just seems like at certain parts the author runs through things a little quickly. It does not affect the story much, in my opinion, I just would have liked for that down time to be a little more thorough.

All in all, The Bladed Faith is a great read. Dalglish is back at it, bringing savage characters with sharp blades and storylines with catastrophic consequences. The Vagrant Gods series has so much promise, and I am excited to see where it goes from here. This is a must read for fans of fantasy.