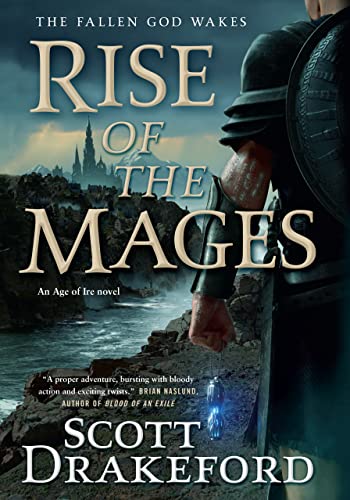 Emrael Ire wants nothing more than to test to be a weapons master. His final exam will be a bloody insurrection, staged by corrupt nobles and priests, that enslaves his brother.

With the aid of his War Master tutor, herself an undercover mage, Emrael discovers his own latent and powerful talents.

To rescue his brother, Emrael must embrace not only his abilities as a warrior but also his place as last of the ancient Mage Kings—for the Fallen God has returned.

And he is hungry.

Rise of the Mages is Scott Drakeford’s debut novel and the first in The Age of Ire series. I found this book to be an adventurous story full of great characters, and, while parts of it left me wanting, I was very impressed with it overall.

I was really enthralled with this book from the start. I love the premise: two brothers (Emrael and Ban) living in a dangerous world, trying to make it on their own. They compliment each other’s skills – one is a genius at crafting (creating objects that run on infusori – a type of magic), and the other training to be a warrior. Brain and braun, the perfect duo and a couple of great characters with motivations the reader can engage with. Of course, there are really important supporting characters, as well (Elle, Jaina, and Halrec, to name a few). Jaina serves as a sort of a guide, and Elle’s role gets increasingly important as the narrative proceeds. This book is very character-driven, so it’s a good thing it is full of awesome characters.

I really liked how adventurous the plot is. As Emrael and his crew search for a way to rescue Ban, they endure a lot of hardship. The author uses this undertaking perfectly as a dual-purpose medium, both as a way to grow the characters and to explore the landscape. The setting does not get expanded too much, as the characters do not necessarily go far, but there are lots of local intricacies that come into play. As far as character growth, as the characters experience more they learn more about themselves and the world around them. They become better fighters and discover better ways to use magic. They gain knowledge about history, their ancestors, and Fallen Gods. This is all really important to the overall plot.

One of the other great things about the plot is that each scene presents a different kind of experience for the characters. They go through a lot in a short period of time, and the fact that each encounter was different from the last was big part of what held my interest.

As I mentioned in the intro, this book did leave me wanting in a couple of ways. First, there is Ban’s story after he gets abducted – the reader does not get much more of his perspective. He has a few short chapters that kind of check in on him along the way, but to me it is not enough. The other thing is that clearly there is a larger plot at play here than just one brother trying to rescue another. Again, we get snippets of this, but the author just barely skims the surface. As the story moved along it could have benefitted from a little more intrigue and buildup, and enhancements in both of these areas would have done the trick.

Overall, Rise of the Mages is a very good book with a great premise, interesting characters, and an adventurous plot. I think most fantasy readers would enjoy it. I happily await book 2 to see where the story goes from here.