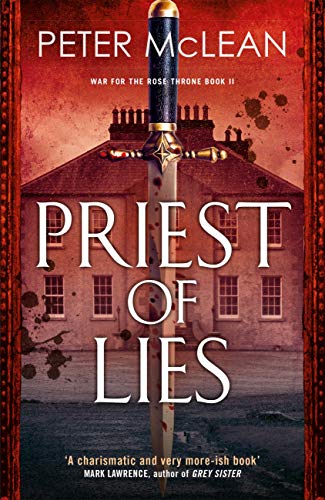 Tomas Piety has been many things: soldier, priest, gangster…and spy. As Tomas’s power grows, the nobility better watch their backs, in this dark and gritty epic fantasy series.

People are weak, and the poorer and more oppressed they are, the weaker they become–until they can’t take it anymore. And when they rise up…may the gods help their oppressors.

When Tomas Piety returned from the war, he just wanted to rebuild his empire of crime with his gang of Pious Men. But his past as a spy for the Queen’s Men drew him back in and brought him more power than he ever imagined.

Now, with half of his city in ashes and the Queen’s Men at his back, the webs of political intrigue stretch out from the capital to pull Tomas in. Dannsburg is calling.

In Dannsburg the nobility fight with words, not blades, but the results are every bit as bloody. In this pit of beasts, Tomas must decide once and for all whether he is truly the people’s champion…or just a priest of lies.

Hello again dear reader or listener, I hope you are well!

I’m back for my next review in the War For The Rose Throne series with Priest of Lies, and let me just say right off the bat, it gets bigger, it gets better, it gets darker! Continuing to follow the narration of Tomas Piety and his story full of spies, gangsters, and harsh justice, felt great, especially as I read the first two books practically back-to-back. In fact, with book one, Priest of Bones (whose review you can find here), McLean introduced the reader to his world, his characters, and mostly hinted at what was yet to come with some great action. But with book two, he really gets down to business. Everything I enjoyed from before was made better here, be it the well woven characters and their arc development, or the cleverly and speedily unfolding story. I also found its relatively episodic nature comfortable to read from a technical point of view, in that even if I left the book for a couple of days for whatever reason, it didn’t feel like I had interrupted the plot midway. Magic is also more prevalent now than before and its added threat raised the stakes considerably.

Tomas has to deal with his PTSD more actively in book two moreover, he becomes more vulnerable in more ways than one, and the way the reader gets to see all this made for some edge of your seat/nail biting moments. With the setting that expands to look past the known Ellingburg streets, the reader meets new allies and new kinds of foe that Tomas and his Pious Men will have to deal with. And while I definitely missed Bloody Anne while Tomas has to move to Dannsburg for a while, following him as he has to figure out and understand a different brand of criminal than what he is used to, was extremely fun as it allowed me to appreciate his character more in how he evolves and learns.

To further sweeten the deal, I was delighted at the amount of tenderness and softness I found in this book as well, which was what endeared me to the protagonists and plot even more so than before. There is just so much to the relationships among the characters that there is a very good amount of hefty feels to be had, both good and bad. But at the same time there were a couple of plot twists I totally didn’t see coming and ultimately precipitated the plot towards a powerful ending that has me equal parts concerned and excited for what is to come next. If the progression from book one to book two is anything to go by in fact, I am confident that book three, Priest of Gallows, is going to continue on this path and be even greater!