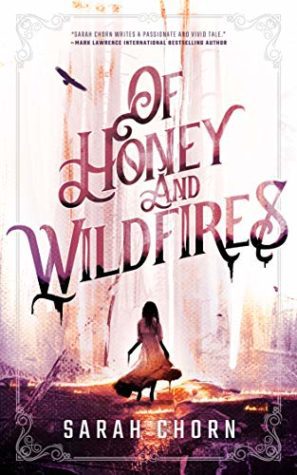 From the moment the first settler dug a well and struck a lode of shine, the world changed. Now, everything revolves around that magical oil.

What began as a simple scouting expedition becomes a life-changing ordeal for Arlen Esco. The son of a powerful mogul, Arlen is kidnapped and forced to confront uncomfortable truths his father has kept hidden. In his hands lies a decision that will determine the fate of everyone he loves—and impact the lives of every person in Shine Territory.

The daughter of an infamous saboteur and outlaw, Cassandra has her own dangerous secrets to protect. When the lives of those she loves are threatened, she realizes that she is uniquely placed to change the balance of power in Shine Territory once and for all.

Secrets breed more secrets. Somehow, Arlen and Cassandra must find their own truths in the middle of a garden of lies.

I’m going to start by saying wow, I was utterly blown away by Sarah Chorn’s lyrical writing. It took me a moment to get used to because it’s such a different writing style to what I usually read, but quickly enough I was swept up in the writing.

Of Honey and Wildfires has a Western-meets-fantasy vibe. There’s the Company who control the entire region where Shine is found, and then there’s the people that live within this territory. These people seem to be lacking in terms of technology and medical care found outside the Company territory. It provides a great backdrop for this stunning story.

We follow two characters here, Arlen and Cassandra. Arlen being the son of the Company owner who has never been inside Shine territory before. Cassandra was bought up within the territory, and lived there all her life (mostly anyway). These two make for great point of view characters because they balance each other out really well. Arlen believes that the Company is good, and therefore his discoveries about what is actually happening are incredibly poignant. He comes at the story from almost a very innocent perspective. Cassandra however has grown up in the territory and is aware of what is happening/could happen. It is well known that her father is a criminal and therefore she lives in the knowledge that the Company are after him. For a lot of the story we see her as a child, so she has a certain childish innocence, but becomes a lot more aware of the issues with the Company early on.

I found myself tearing through the story at a rate of knots because I just wanted to know where the story was going. It’s so enthralling and perfect for both fantasy and Western fans alike.

Chorn’s writing is absolutely stunning. Her writing is lyrical, and soft, and she has the ability to reduce you to tears easily. It’s so easy to get swept up in her writing and it gives everything almost a soft edge to look back on. There are twists and turns that I didn’t expect, and it’s full of representation too.

Of Honey and Wildfires is well worth picking up, and with the sequel already out now is the perfect time to read it!