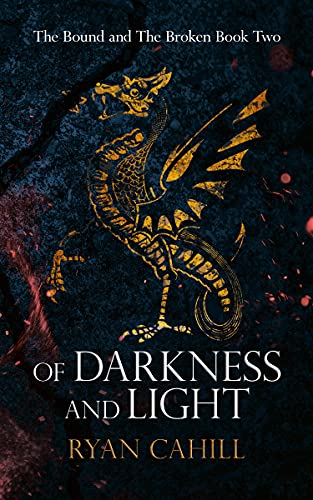 Heroes will rise. Nations will fall.

Behind the towering walls of Belduar, Calen Bryer and his companions stand in defense of the city and its new king. In over a thousand years, Belduar has never fallen. It has stood as a bastion of hope. But the Lorian empire are at its walls once more, and the Dragonguard are coming.

In the North, with Faenir by her side, Calen’s sister Ella arrives at the port of Antiquar. She holds no fear of the unknown. She will see this through, no matter what – or who – gets in her way.

Meanwhile, at the embassy of the Circle of Magii in Al’Nasla, Rist Havel hones his newfound powers in preparation for the trials. Unbeknownst to Rist, he is being watched, measured, and judged. He was not taken into the Circle by chance. There is greatness in him. But great men can do terrible things.

As Lorian forces land on southern shores and Aeson Virandr’s letters of rebellion find their way to the right hands, only the Knights of Achyron see the true danger. The danger that stirs in the darkness. The coming shadow will not stop. It will consume all in its path. It wants for nothing but blood and fire.

Of Darkness and Light is the second installation in Ryan Cahill’s The Bound and the Broken series, and it is a book in which the author dramatically expands in all aspects versus book 1 (I previously reviewed both the first book and accompanying novella: Of Blood and Fire; The Fall). The storyline has much more suspense and conflict, the character set is expanded, the characters also grow significantly, the world building is grander, and the pace is improved, as well. Of Darkness and Light is truly epic.

I cannot speak highly enough of this book. Cahill took what was a pretty good start to the series and amped it up with the sequel. The first thing that stuck out to me was the improvement on the pacing over book 1. I wanted more steady movement, action, mini conflicts and resolutions, and shorter chapters. These are all things that personally keep me interested in a story, and Cahill really came through. The characters are tested time and time again, forcing them to grow in ability as well as fortitude. The narrative in this book was much more explosive. The more difficult the situation, the more they are made to go beyond their own limits (or what they perceive as their own limits). While the average chapter length is shorter in this book, there were still a few longer ones. Overall, though, I thought the pacing was significantly better.

The comments about character growth do not just apply to Calen (but they DO apply to Calen in a very profound way, more on that later), but to everyone involved. I really think the best thing the author did was separate the characters into different areas of the continent. As Calen gets more powerful and further understands the bond with Valerys, it would be so easy to let everyone rely on him to pull them out of trouble every time a life-or-death situation comes along; instead, by moving the pieces around the chessboard Cahill has made it so that the evolution of each character becomes important if they are going to reach their collective goal.

This tried-and-true epic fantasy strategy of spreading the characters across the continent has many positive effects on a book, if done right (and Cahill does it right). I like how it takes the world building to another level. As the characters explore the world, so do the readers. We get to experience more of the landscape, the different regions, and how they effect the history of the narrative. More peoples come into the fore, which gives the author an opportunity to highlight various cultures and heritages and how they come in to play. These are items that add depth to a story, and I enjoyed how they played out in this book.

Of course, I cannot finish this review without speaking about Calen. He plays the role of reluctant hero really well, and I love the direction the author is taking with him. There are times when he has to pull out the big guns to save the lives of his friends and compatriots, but that is not always the case and his power is not limitless. It is somewhat trope-y at times, but that is not a bad thing. Tropes are there for a reason; oftentimes, they give us something to base our understanding of a story around. Calen is constantly concerned for the people around him, always worrying over individual fates while at the same time knowing there is a greater good is at stake. He gets caught in the moment, for sure, and needs reminding, but that is what friends are for, eh? Calen is a great protagonist, and I am excited to see how he continues to develop.

Of Blood and Fire was a good debut, but Of Darkness and Light is where Cahill shows off his writing chops. This book is Epic (with a capital E), and I cannot wait to see what comes next. I highly recommend it.