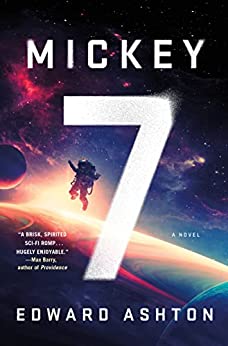 Dying isn’t any fun…but at least it’s a living.

Mickey7 is an Expendable: a disposable employee on a human expedition sent to colonize the ice world Niflheim. Whenever there’s a mission that’s too dangerous—even suicidal—the crew turns to Mickey. After one iteration dies, a new body is regenerated with most of his memories intact. After six deaths, Mickey7 understands the terms of his deal…and why it was the only colonial position unfilled when he took it.

On a fairly routine scouting mission, Mickey7 goes missing and is presumed dead. By the time he returns to the colony base, surprisingly helped back by native life, Mickey7’s fate has been sealed. There’s a new clone, Mickey8, reporting for Expendable duties. The idea of duplicate Expendables is universally loathed, and if caught, they will likely be thrown into the recycler for protein.

Mickey7 must keep his double a secret from the rest of the colony. Meanwhile, life on Niflheim is getting worse. The atmosphere is unsuitable for humans, food is in short supply, and terraforming is going poorly. The native species are growing curious about their new neighbors, and that curiosity has Commander Marshall very afraid. Ultimately, the survival of both lifeforms will come down to Mickey7.

That is, if he can just keep from dying for good.

Ashton channels a great mix of the ‘fool’ protagonist, and the underdog story that pulls some pretty complex schemes to get the upper hand in some sticky situations. It goes in thinking, ‘Let’s not just use a crash test dummy for experimentation, lets make the dummy into a character that can be cloned, completely expendable, and see how his relationships develop in an isolated space station!’ Mickey 7 was such a fun and light read. It was a mix of the fantastic Sam Rockwell film ‘Moon’ and the Paul Rudd Netflix show ‘Living with Yourself’. It leans more to the classic Scalzi side of humor and wit with a more modern Andy Weir kind of feel (with less science). I felt like Mickey had the perfect personality of being a schlubby pushover when it came to doing his duty, but evolves to be the mastermind of his own destiny as the book proceeds.

At this point, you may be wondering what i did to get myself designated as an Expendable. Must have been something awful, right? Murdered a puppy, maybe? Pushed an old lady down a staircase?

The story wrestles with the conflict of what makes you ‘You’ if you were to be duplicated with all your previous memories. It asks ‘are you really the same person?’. When you’re brought face to face with yourself in a life or death situation, what would you do? Would you fight to live even though there’s another ‘you’ already out there? Some of those questions I found pretty interesting and I think the book handled them really well. It’s about understanding yourself as well as understanding others. There’s also a layer of the believers in a fictional religion who declares clones as ‘abominations’. Which puts another hurdle into Mickey’s ability to develop some relationships within the crew,

Here’s a thought experiment for you: Imagine you found out that when you goto sleep at night, you don’t just go to sleep. You die. You die, and someone else wakes up in your place the next morning. He’s got all your memories. He’s got all your hopes and dreams and fears and wishes…
Ask yourself– Would it make any practical difference in your life? Is there any way that you could even tell?

The ‘creepers’ in this story initially feel like the monstrous ‘shoot first – they just want to eat us’ type and it takes the untrained naivete of a nobody like Mickey to haphazardly understand these creatures. I enjoyed how that concept evolved through the book as well. The supporting cast was also a great mix of personalities and every scene with the Marshall left my sides hurting with laughter. The audio narration for Marshall was fantastic – very ‘Full Metal Jacket drill Sgt.’ and the moments in the book where there is dialog through his ocular, the audio transforms that into a walkie-talkie radio transmission, and he doesn’t identify the call signs every time which I thought was a nice touch and really helps it flow.

Mickey7 pulls off the impossible by flawlessly weaving gallows humor in a blanket of optimism and empathy. Ashton has found his voice and earns my ‘Top Reads’ spotlight. I hope he continues to explore these kind of tropes and sprinkle in his authentic brand of humor.