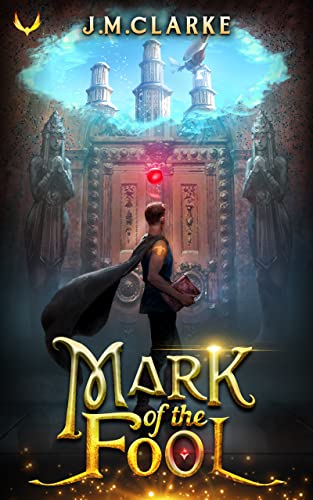 The gods chose him. He said no.

After his parents died, Alex Roth had one desire: become a wizard. Through hard work, he was accepted into the University of Generasi, the world’s greatest academy of wizardry…

Fate, however, had other plans.

On his eighteenth birthday, he is Marked by prophecy as one of his kingdom’s five Heroes, chosen to fight the Ravener, his land’s great enemy. But his brand is ‘The Fool’. Worst of the marks.

Rather than die or serve other Heroes like past Fools, he takes a stand, rejects divine decree…and leaves. With his little sister, his childhood friend, and her cerberus, Alex flees for the university, hoping to research the mystery of the Ravener. He’ll make lifelong friends, learn magic from mad wizards, practice alchemy, fight mana vampires and try to pay tuition.

There’s one small problem. The Mark insists on preventing the Fool from learning and casting spells, while enhancing skills outside of divinity, combat, and spellcraft…

…that is, unless he learns to exploit the hell out of it.

This book was so much fun to read. Having picked at random without any expectation, this book has already become one of my favorites.

Alex is likeable MC whose optimism and ability to adapt to adversities just kept me rooting for him all the way through. He’s a typical village youth having dreams of becoming a wizard and helping his family. The land was in peace and he doesn’t have any great aspirations. Very much a DIY (Do It Yourself) type of guy, he’s self taught himself a spell and mastered it enough to get into the biggest magical university of the realm and is eager to get there.

But then, things take a turn. The ancient evil Ravener has decided to pop back into the world again and unleash it’s monsters. As mandated, five heroes will rise up to combat the evil. Life gets complicated for Alex when he gets one of the five chosen Marks, but rather than the Mark of Wizard which he craved, he got the Mark of the Fool. Having no interest into being dragooned to playing a support role to bunch of heroes in the fight against the Ravener, he decides to hide his mark, run away and continue his dream of going to the University.

And there in starts the adventure. First part of the book is about the journey where the intrepid group of adventurers have to face ancient mysteries, fight off monsters and accidentally stumble upon a secret realizing that the things aren’t what they seem to be and that the stakes were bigger than they thought! The second part of the book transitions into their University life learning all about magic types, skills etc. The pace does drop a bit as the focus moves from the macro world into the micro life at the University, but I love school/university books as a progression type!

The prose is simple yet very engaging. It smoothly transitions from once scene to another, that I never felt the hours flow by. It just grasps you gently and is very immersive that makes it easier to just go with the MC and his ragtag crew. It has the right amount of world building to impress without delving to purple prose and the fight scenes have the right oomph to keep you hooked. The characters are also realistic and we can understand and support their actions.

If you love a good School/University based Progression fantasy with likeable characters similar to Mage Errant of Arcane Ascension, then you’d love this.