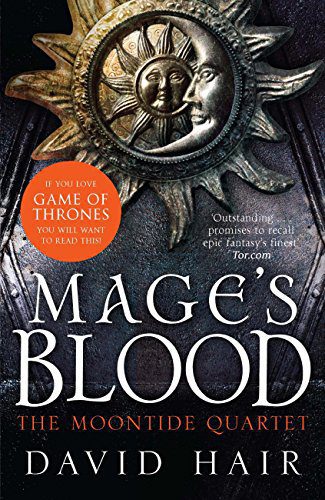 The Moontide is coming. Urte stands on the brink of war. Now three seemingly ordinary people will decide the fate of the world.

Urte is divided, its two continents separated by impassable seas. But once every twelve years, the Moontide sees the waters sink to their lowest point and the Leviathan Bridge is revealed, linking east to west for twenty-four short months.

The Rondian emperor, overlord of the west, is hell-bent on ruling both continents, and for the last two Moontides he has led armies of battle-magi across the bridge on crusades of conquest, pillaging his way across Antiopa.

But the people of the east have been preparing – and, this time, they are ready for a fight.

Over the years I have heard fantasy fans saying they are looking for a new series with X from this author and Y from that author. When looking for a new epic fantasy series, I am always on the prowl looking for a story that has the humongous world building we see from Steven Erikson and combine that with the wonderous magic systems we are always treated to with Brandon Sanderson. Well it took about 5 years but I finally found it and I am delighted to share it with you. Mage’s Blood by David Hair has to this day been a relative unknown to most SFF readers and it is every bit as: creative, captivating, absorbing, and down write spectacular as anything top SFF authors have printed recently. So sit back, relax, and let me take you on a journey to the wonderful world of Urte.

The two continents of Yuros and Antiopia are divided by a huge body of water, unable to be crossed by sea or air due to the high tides and gusting winds. The two lands were completely separate until the ascendant mages decided to build the Leviathan Bridge which will rise from the sea once every twelve years during the Moontide. The bridge was meant to facilitate trade between the two continents, but two Moontides ago the Emperor of Yuros decided to launch the First crusade against Antiopia and imposes his will on the foreign land. Twelve years later the Second Crusade was launched and the cycle of war was cemented. The story begins with the Third crusade about to get underway, but the people of Antiopia are ready and will go to any depths to defend their home from invasion.

The magic system is very unique and as complex as anything in the SFF community today. Magic is passed down through heritage starting from the ascendant mages who built the Leviathan Bridge. Every new generation receives half the magical powers or gnosis until the magic is no longer present in the blood stream. The more prominent the gnosis is in the mage, the more powerful the spells and magic can be. The casting of spells is broken down based on the four elements: Earth, wind, fire, and water. Then, the author has four different affinities that can be used in various ways. The system is too complex to explain so I’ll show you the below table. What Mr. Hair does with his magic system is brilliant and plays a huge part in the story.

Mage’s Blood is a Multi-POV story with dozens of side characters each begging for your attention. First we have Alan Mercer, a failed mage forced to live a simple life in Yuros. Alan becomes involved in a political scheme where he is sent on a mission to discover the origins of the ascendant mages power, the Scytale of Cornelius. Next we have Elena Anborn, Alan’s aunt and envoy of Gurvon Guile in Javon. She becomes the protector of King Olfuss and his two children and has her work cut out for her when Javon is attacked by an underground militia with magic users of there own. Finally we follow Ramita, a market girl in Antiopia. She is approached through her family for a marriage to the most hated man in the East, Antonin Meiros. Meiros is the ascendant mage responsible for the construct of the Leviathan Bridge.

Mr Hair’s writing style is very smooth and keeps the tension flowing from chapter to chapter. You will always be at the edge of your seat with anticipation and shocked when he drops in a huge twists. Mage’s Blood has everything you could ever ask for in a epic fantasy novel: magic, political scandals, lore, and epic battles especially the details in hand to hand combats. Fans of Malazan and The Stormlight Archive will feel right at home in Mage’s Blood and I can’t wait to see what he comes up with next!

Cheers to you David Hair!