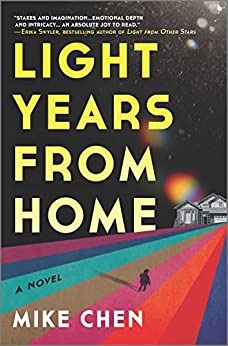 Every family has issues. Most can’t blame them on extraterrestrials.

Evie Shao and her sister, Kass, aren’t on speaking terms. Fifteen years ago on a family camping trip, their father and brother vanished. Their dad turned up days later, dehydrated and confused—and convinced he’d been abducted by aliens. Their brother, Jakob, remained missing. The women dealt with it very differently. Kass, suspecting her college-dropout twin simply ran off, became the rock of the family. Evie traded academics to pursue alien conspiracy theories, always looking for Jakob.

When Evie’s UFO network uncovers a new event, she goes to investigate. And discovers Jakob is back. He’s different—older, stranger, and talking of an intergalactic war—but the tensions between the siblings haven’t changed at all. If the family is going to come together to help Jakob, then Kass and Evie are going to have to fix their issues, and fast. Because the FBI is after Jakob, and if their brother is telling the truth, possibly an entire space armada, too.

The perfect combination of action, imagination and heart, Light Years From Home is a touching drama about a challenge as difficult as saving the galaxy: making peace with your family…and yourself.

It’s best to go into this knowing what sort of story you’re about to read. I didn’t have any particular expectations besides knowing this was science fiction. Although this is sci-fi, it’s very soft and subtle with an intimate glimpse into the life of one family over the course of several days. There aren’t any grand, epic alien space battles written on page. An intergalactic war is occurring on the periphery but the focus is on the real world aftermath following a young man’s disappearance. Can I just say how much I love this idea? I think many authors may have ran in a different direction with this idea but I’m so glad Chen stayed true to his original vision once it had all the parts.

The novel begins with Jakob, who has found himself in a rather unfortunate hostage situation aboard an enemy spacecraft. Read a little further and you learn that Jakob is an important asset in this intergalactic war, for the good guys. Now, this is all happening 15 years post alien abduction so I’m instantly hooked.

We begin in the middle and we end in similar fashion. I love what Chen did here. We’re thrown right into the middle of things, and are presented with a deep character examination of family trauma. Told through three alternating POVs, we follow the Shao siblings; twins Jakob and Kassie, and Evie, as we learn how things have changed since Jakob’s disappearance 15 years prior. Chen did an amazing job capturing the dynamics between these three siblings and how they each dealt with their conflicts, hopes and dreams, griefs and losses. Now, there is some character growth from beginning to end but it is limited and that makes total sense for this story. It would’ve been a bit unrealistic, in the span of a few days, to heal, forgive, and mend things that have been in place for over a decade. Chen offers us a small glimpse into the Shao family and it’s believable, honest, and true to character. As I said before, we are deep within their story, their middle. There is still work to be done.

“Everything whirled around us, but we stayed the same.”

Chen’s writing is easy to read and paced well. I found myself flying through the chapters. There was one subplot that didn’t exactly hit the mark for me because it felt a bit fragile in its execution but your mileage may vary. I would’ve liked to see something else done to add action and energy to the plot. Light Years does touch on some really interesting alien technology, with it playing a key role to the plot. There is also some fantastic alien descriptions, although limited. There are content warnings for dementia, substance abuse, and a drowning briefly mentioned.

Light Years From Home is first and foremost a beautifully crafted family drama set within a world where aliens do exist and there is an intergalactic war happening in the vast reaches of space. This is for everyone wondering what happens to those we leave behind, especially those who are picking up the pieces. Chen shows us that hope, healing, and forgiveness is a whole process, and there is no singular path or timetable for when it happens.