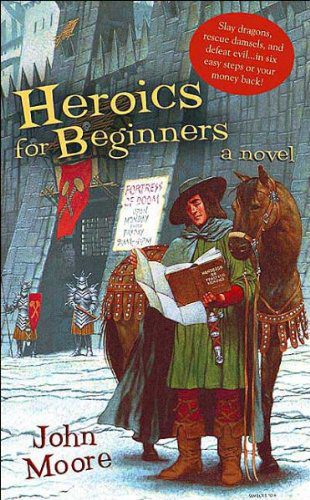 When a seemingly crazy, poorly dressed soothsayer tells you not to let a magical talisman fall into the wrong hands, take him or her seriously. DO NOT laugh it off and leave said talisman simply lying around on a side table; you might as well just end the world yourself.

—The Handbook of Practical Heroics, p. 134

The kingdom of Deserae is in the most direly perilous of dire perils. The realm’s precious magical talisman—Ancient Artifact Model Seven—is in the grimy hands of the evil Lord Voltmeter (He Who Must Be Named) . . .

Only one man can stop him (and, by the by, win the hand of Deserae’s exceedingly well-proportioned princess). Unfortunately, he’s never really done this sort of thing before. But Prince Kevin Timberline is determined to find a way into the Fortress of Doom (perhaps through the gift shop?), resist the advances of a leather-clad, whip-wielding temptress (well, maybe that’s not so bad), and face an army of unspeakable nastiness (okay, that’s bad), armed only with his reasonably pure heart, questionable courage—and most importantly, a copy of The Handbook of Practical Heroics . . .

Sometimes a book chooses you. As soon as I haphazardly came across this book in a local shop, I kinda chuckled at the fake stick on the front cover. It reads:

“Slay dragons, rescue damsels, and defeat evil… in six easy steps or your money back!”

I had never heard of John Moore but this looked like it was going to be some kind of satirical trope-flipping take on the old ‘hero’s journey’ fantasy story. And yes, that’s exactly what it is. (Much like Kevin Hearne/Delilah Dawson’s ‘Kill The Farmboy’ series.) And from what I found this is John Moore’s wheelhouse as he has a number of other releases such as ‘The Unhandsome Prince’ and ‘A Fate Worse Than Dragons’.

A few things came to mind while reading this. I immediately thought of ‘Space Balls, but a Fantasy’ and of course ‘The Princess Bride’. The story opens up as we follow Thunk the Barbarian attempting to penetrate the Fortress of Doom in order to obtain the Ancient Artifact (that powers the Diabolical Device) from the Evil Lord Voltmeter (the one who must be named). Yeah. That’s where we’re going with this.

Once we discover that Thunk has failed his task and met an untimely demise, 4 potential suitors from the Twenty Kingdom arrive at the castle for a chance to win the princess’s hand in marriage. These suitors are then given a task – to recover the Ancient Artifact from the Fortress of Doom.

Through the story we explore the criteria of a ‘comic sidekick’ and ‘Evil Assistant’, fly fishing (because why not), why fortified castles always seem to have vulnerable ventilation shafts, and the infamous history of the Ancient Artifact. All the while showing that with a little determination, wit, and courage, anyone can be a hero! (in six easy steps or your money back!)

The humor throughout this flowed quite well and mostly through the dialog of the characters and their banter, though also through some clever worldbuilding. It’s a book written for laughs and flips plenty of tropes we often see in the classic tales of heroes long ago. A fun comic-fantasy page-turner!