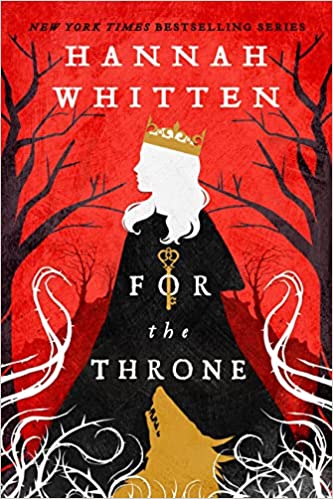 In this breathtaking sequel to the instant New York Times bestseller For the Wolf, Red’s sister Neve struggles to escape a mysterious land of twisted roots, lost gods, and mountains made of bone—and the only clues to her rescue are a magic mirror and a dark prince who wants to bring the whole thing crumbling down.

The First Daughter is for the Throne

The Second Daughter is for the Wolf…

Red and the Wolf have finally contained the threat of the Old Kings but at a steep cost. Red’s beloved sister Neve, the First Daughter is lost in the Shadowlands, an inverted kingdom where the vicious gods of legend have been trapped for centuries and the Old Kings have slowly been gaining control. But Neve has an ally, though it’s one she’d rather never have to speak to again: the rogue king Solmir.

Solmir wants to bring an end to the Shadowlands and he believes helping Neve may be the key to its destruction. But to do that, they will both have to journey across a dangerous landscape in order to find a mysterious Heart Tree, and finally to claim the gods’ dark, twisted powers for themselves.

“Anyone who can make an Old One feel something like love is deserving of deference.”

I ready For the Wolf last year and it was one of my favorite reads! I was absolutely delighted to receive review copies of For the Throne via physical book and audiobook.

I was anxious to get to more of Red and Eammon because I enjoyed their storyline more in book one and liked Red’s POV more than Neve’s. So, color me shocked when I found myself eager to get back to Neve’s POV in this book whenever it was Red’s turn. I liked that her and Solmir’s relationship wasn’t just a repeat of Red and Eammon’s. Although they both touched on the enemies to lovers front, Solmir actually has been a ‘bad’ guy at some point, whereas Eammon was just perceived to be one. Neve and Solmir both have done some things that could pitch them as villainous, and they understand each other to a degree that other people cannot. It makes me connect to them on a level that I sometimes can’t with other characters. What person hasn’t made tough decisions that might cast them in an unfavorable light to others? Don’t we all just want someone to take a look beneath the surface and understand the reasons why we made those decisions, even if they aren’t going to be the popular choice? I liked that they had common ground in that aspect.

Even more, I like that this book focused on sisterhood and the relationships between women. Most of this book revolves around how Red and Neve can change the world together, as two halves of one whole. This could have absolutely dissolved into a book that pitted Neve and Red against one another, but instead it did the opposite and brought them closer.

This book didn’t quite fully enrapture me the way book one did, but I also don’t think that’s the book’s fault. I’m at an extremely busy point in my life where reading has had to take a backseat, and am not as present as I want to be when I am reading. I think upon rereading this when I have more time, I’ll be just as involved. This in no way is the dreaded sophomore slump you hear about with sequels. It is just as lush of storytelling, has swoony romance, and that dark, glittering fairytale quality about it.

Also, when I would turn to the audiobook, the narrator did a fantastic job. Inés del Castillo lent to the eeriness at just the right points of the novel with a haunting voice. At other times, engaged us by vocalizing those exciting, action-filled moments beautifully. The performance was a 10/10. The intro was especially spectacular and drew me in immediately.

Thank you to Orbit Books for the finished copy and to Hachette Audio for the audio version!