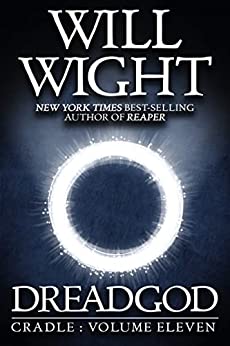 The battle in the heavens has left a target on Lindon’s back.

His most reliable ally is gone, the Monarchs see him as a threat, and he has inherited one of the most valuable facilities in the world. At any moment, his enemies could band together to kill him.

If it weren’t for the Dreadgods.

All four are empowered and unleashed, rampaging through Cradle, and grudges old and new must be set aside. The Monarchs need every capable fighter to help them defend their territory.

While he fights, he sends his friends off to train. They’ll need to advance impossibly fast if they want to join him in battle against the kings and queens of Cradle.

Together, they will need power enough to rival a Dreadgod.

The best book in the series (yet) as Will takes Lindon and Co closer to a legendary finale.

The book picks off seamlessly from end of Reaper. The Monarchs are in a flux after the epic revelations at end of Reaper as they try to analyze the implications and fallout of Ethan’s actions. This flux gives Lindon an opportunity to squeeze out from the Monarch’s direct attention allowing him to further his and his teams own agenda. Things are made complex as he’s bound by oath to not tell them the end goal. It’s a race for Lindon to cement his authority over the Labyrinth and utilize the resources to gain more power to challenge the status quo and bring about the change he wants.

To throw in more chaos to a already muddled picture, The Silent King makes his appearance finally. With all 4 Monarchs on the warpath and more stronger than before, the political and power hierarchy of Cradle is far more disturbed more than ever, post the last Dreadwar. This time, rather than Monarchs vs Dreadgods, we have a three way between Monarchs vs Lindon vs Dreadgods who all have their own end game.

Not just here, but the situation in Abidan isn’t any better. Oz’s AWOL and return caused more than a few ripples that may well tear the Court of Seven apart with Malkiel playing his own game and things don’t bode well to the future of Suriel or Ozriel.

The book is crammed with exciting action as we see everyone with power pitted against one another. The political intrigue and the inherent untrustworthiness and selfishness of most of their players to further their own at expense of others sets the background for the book. The intrigue is well built as layers are peeled and hidden agendas are made public. not just to the players but to the world as a whole.

The “Progression” part kicks up couple of notches as we finally get to see an near fully powered Lindon and Yerin go head to head against people who could have squashed them before. The action is just plain over the top and epic. If you are a fan of Royal Rumble with Monarchs, Heralds, Sages and Dreadgods all smashing each other up, this is the book for you. I simply haven’t had this much fun in any book in recent memory. Reminds me of the action in Ghostwater and Wintersteel, but kicked up the the wazoo in power levels.

Alliances are reset, new partnerships are forged bringing events to a head as we get to the finale in Waybound, the final book, which I already can’t wait for! I absolutely could not put this down and will have a bad day at work tomorrow, but it was worth it!