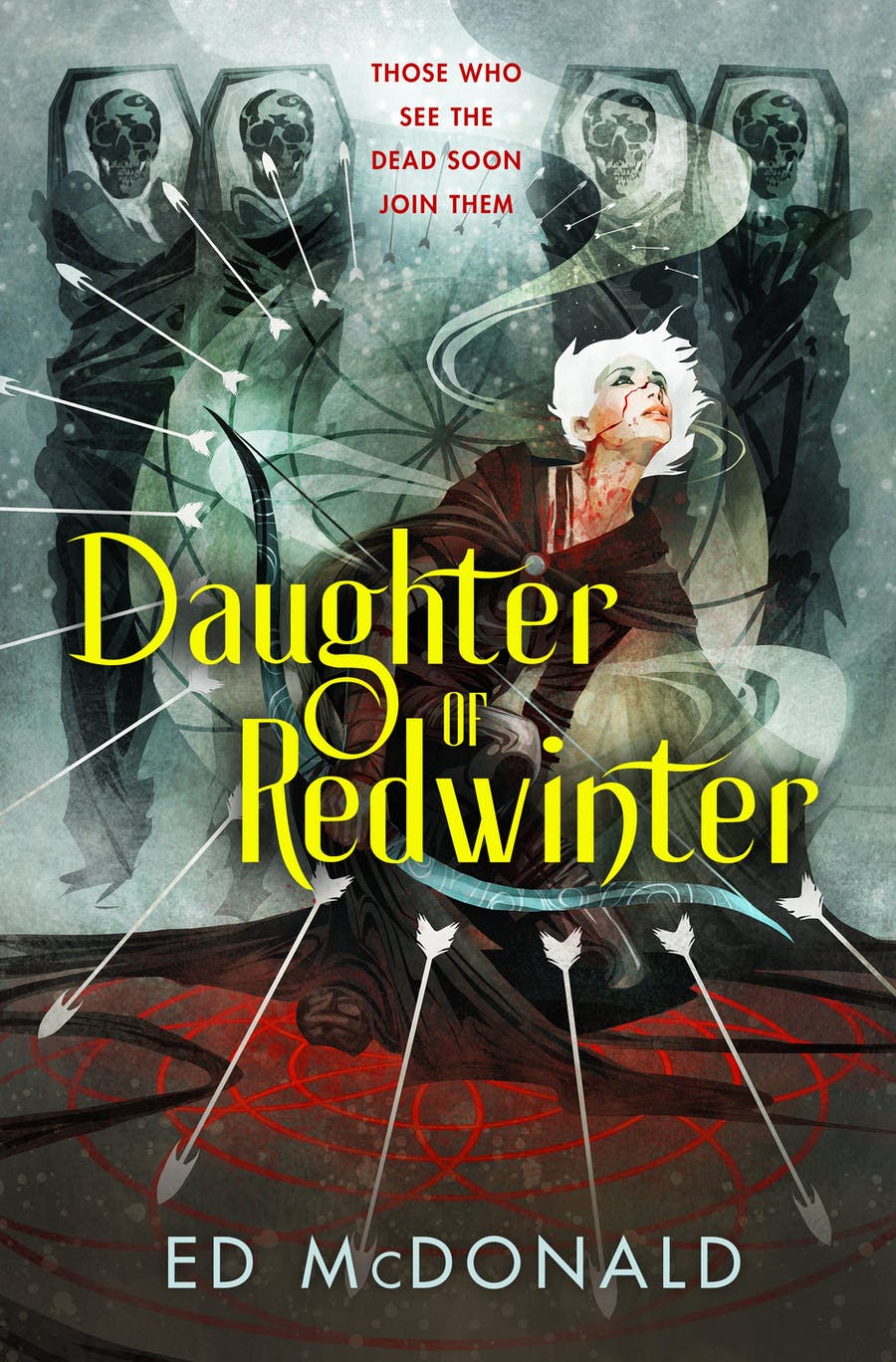 Those who see the dead soon join them.

From the author of the critically-acclaimed Blackwing trilogy comes Ed McDonald’s Daughter of Redwinter, the first of a brilliant fantasy series about how one choice can change a universe.

Raine can see—and speak—to the dead, a gift that comes with a death sentence. All her life she has hidden, lied, and run to save her skin, and she’s made some spectacularly bad choices along the way.

But it is a rare act of kindness—rescuing an injured woman in the snow—that becomes the most dangerous decision Raine has ever made.

Because the woman is fleeing from Redwinter, the fortress-monastery of the Draoihn, warrior magicians who answer to no king, and who will stop at nothing to reclaim what she’s stolen. A battle, a betrayal, and a horrific revelation force Raine to enter the citadel and live among the Draoihn. She soon finds that her secret ability could be the key to saving an entire nation.

Though she might have to die to make it happen . . .

Thanks to the publisher for an advance reading copy of Daughter of Redwinter (The Redwinter Chronicles #1) for review consideration. This did not influence my thoughts or opinions.

Daughter of Redwinter is a spellbinding piece of fantasy; a unique world with morally grey characters abound, a fascinating magic system, buried history that oozes to the surface, and a young female protagonist you won’t soon forget. Highly recommend.

Are you a fan of McDonald’s Raven’s Mark trilogy? Well, do I have some good news and some not so good news for you (it isn’t bad news, I swear).

I’ll start with the not so good – THIS AIN’T RAVEN’S MARK. Not even close. It is a fairly bleak world with grey characters and all that, but it doesn’t hold a candle to the grittiness that the Misery brought to Galharrow and company. So if you are coming in looking for grimdark or grimheart, you will definitely be a tad disappointed to find it isn’t really here.

Oh, you wanted the good news?

This is a fantastic beginning to what I expect will be another amazing series from McDonald. What he brings over from his previous series is that ability to immediately engage the reader in his world and invest them with his characters. There is an intriguing magic system, ancient lore that is carefully revealed, a dark mystery, and a cast of characters whom not a soul can trust (especially our protagonist) – all wrapped within a world that I cannot wait to explore more of.

But let’s take a moment to focus on our main POV, Raine. She has this ability to speak with the dead, which you’d think would be useful, but really just marks her for death. Raine is young and tends to make rash decisions that put her life in jeopardy, but she is also headstrong and doesn’t take BS from anyone. I was immediately engrossed in her story arc from page 1 because, come on, who doesn’t love an archer story? Especially one that leads to lore and a magic system we only scratch the surface of.

McDonald has a winner on his hands here that is sure to enchant readers worldwide. I liken it a bit to JT Greathouse’s The Hand of the Sun King with its headstrong, naïve protagonist and intriguing magic system tied with a bit of a coming-of-age flavor. It is a definite recommendation and will land on my best of 2022.