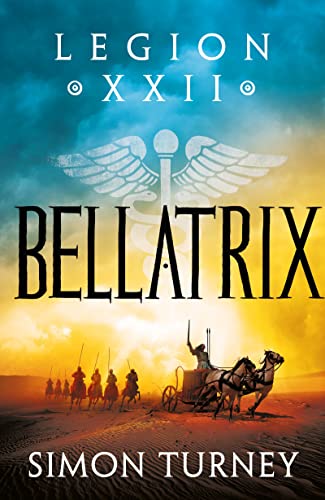 Warrior and combat medic of the Twenty Second Legion, Titus Cervianus, must fight the armies of the fabled Warrior Queen in this blistering new Roman adventure from Simon Turney.

Cervianus and his comrades march into the unknown as he and the Twenty Second Legion contend with the armies of the Bellatrix: the Warrior Queen of Kush. The Kushites and the Egyptians are united against the Roman presence in their lands – but there are complex political and military forces at work. Deep in the deserts, Cervianus and his comrades must brace themselves for a furious onslaught as they take on the might of the Bellatrix.

‘If you want gritty and utterly authentic edge of the seat Roman action, you should be reading Simon Turney.’ Anthony Riches
‘Brings a whole new dimension to the genre… Recommended.’ Historical Novel Society
‘A blistering desert epic, brimming with tension, mystery and adventure!’ Gordon Doherty

During the First Century AD, the Roman Empire was at the cusp of its zenith. In later years it would expand and grow. But during the reign of Augustus, the Empire suffered embarrassing defeats in Arabia and Kush. This novel is an exploration of how the Romans never subdued the Kushites but had they done so, this would have been a game-changer in terms of alternate history. The entire history behind the Kushites and their relationship with Ancient Egypt and Rome is a fascinating subject and has rarely been explored. I commend Simon Turney for highlighting a spotlight on this.

Blistering Deserts, Stinging Scorpions, and Poisonous Snakes all hamper the Roman Legions. Simon illustrates the journey that struggles with which the Persian Army of Cambyses had to go through and juxtaposes it with the Roman Legions marching blind into the Deserts of Kush. The worldbuilding is researched with the attention of a historian, where you feel as if you are in this world. Simon Turney has been writing about the Roman Period in his novels for years, and once you read his novels, you can never go back. Once you read Bellatrix, you’ll be introduced to a world of priests, temples, action, diplomacy, and tourism of the world that once existed thousands of years ago. If you haven’t studied about the Kushites, now is your chance to do so!

The characters are extremely well written, with Cervianus being the main hero of the story. You’ve got Draco the tough tribune, Narscia the legendary veteran of Rome, and then you’ve got stubborn-headed Roman Generals that refuse to listen to reason. You’ve got the Queen of Kush and her mighty armies wanting to drive Rome from their lands. This is a world that is stunningly researched, with characters that may have existed thousands of years ago now brought back to life. It is a novel that I thoroughly recommend. There is so much detail that it would be impossible to summarise all of it. Brilliant writing!