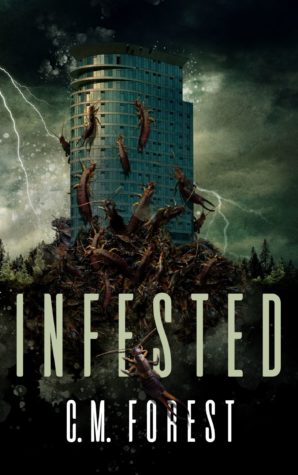 Something sinister is happening inside the New Leaf apartment building

Olivia wakes on her bedroom floor, head spinning in a pool of vomit. Something isn’t right. The power is off and her husband is missing.

But the vicious storm outside is nothing compared to the storm raging outside her apartment doors. A parasite has begun invading, possessing, the residents. Transforming them into twisted, murderous versions of their former selves with one thing on their mind. To kill.

Screams echo from the darkened hallway as Olivia, desperate to find her husband, ventures unknowingly into a world of violence and mayhem.

Trapped within the New Leaf’s endless corridors, she must face her fears and discover the dark, ancient secret behind the insanity. She must face the Infested.

I received a copy of this book from the publisher in exchange for an honest review.

I thought Infested was pretty creepy at the start, and then it got to the climax and somehow I was even more creeped out!

Set entirely within a high-rise apartment block C.M. Forest makes Infested into a high-stakes horror. Nothing is as it seems and the building quickly becomes a dark nightmare for Olivia. She’s trapped in her building with no power or phone service and these earwig type creatures that seem to be taking over the residents and turning them into violent horrors.

Fast-paced and hard to put down Forest lays out a trail of breadcrumbs that will both lead you in the total wrong direction but feed you just enough information that you keep guessing all the way until the end. I genuinely didn’t see where the book was going, but it was worth all the build-up and suspense.

With Olivia running around in the dark the apartment building feels both entirely too large but also very claustrophobic, there seems to be horrors waiting for her around every corner.

Pick this up if you’re a fan of horror, you’ll find yourself reading late into the night (and then regretting it when you actually try to sleep).

C.M. Forest, also known as Christian Laforet, is the author of the novel Infested, the novella We All Fall Before the Harvest, the short story collection The Space Between Houses, as well as the co-author of the short-story collection No Light Tomorrow. His short fiction has been featured is several anthologies across multiple genres. A self-proclaimed horror movie expert, he spent an embarrassing amount of his youth watching scary movies. When not writing, he lives in Ontario, Canada with his wife, kids, three cats and a pandemic dog named Sully who has an ongoing love affair with a blanket.

Tell us a bit about yourself and how you became a horror writer?

My name is Christian Laforet, I’m a Gemini and I enjoy long walks on the beach. No? Okay, really though, my name is Christian, although I write under the far more mysterious name, C.M. Forest, I am in fact a Gemini, but can take or leave the beach to be honest.

I’ve always been a huge fan of horror. Some of my earliest memories are of watching scary movies with my brother. Some kids grow up with The Berenstain Bears and Clifford. Me? I had Freddy and Jason.

I would describe much of my creative life as being…directionless. I went to school for animation, but it never really felt right. From there I sort of floundered around until, one day, shortly after the birth of my eldest daughter, I began to write. There was no destination in mind, just a long, rambling flow of words that eventually coalesced into a novel. The story was garbage, and lives in exile somewhere in the dark recesses of my computer, but the act of writing was amazing. I loved it!

Let’s talk about Infested. Without giving too much detail, tell us what this story is about and what was the inspiration behind this quirky book?

Infested follows a woman, Olivia, during the worst night of her life. She wakes up on the floor in her apartment with no idea how she got there. Adding to her distress, her husband, Liam, is missing. Now, these things are pretty troubling on their own, but what Olivia finds lurking in the hallways of her apartment building are much, much worse. While she slept, the entire building has been overrun by the Infested. Parasitic insects that have turned her friends and neighbours into blood-thirsty lunatics. Olivia has to show a level of initiative, of courage, she would have said did not exist within her before that evening, and discover the awful, ancient secret beyond the nightmare.

Infested actually began life as a one paragraph synopsis I jotted down while listening to the Social Network soundtrack by Trent Reznor and Atticus Ross. Something about that soundtrack really resonated within me. I could so clearly see this battered, bruised woman facing down such great, monstrous horrors. From there, it was just letting her find her way free of the hell her building had become.

This is a really intense book. Did you find any section particularly hard to write?

Okay, so I’m going to try and not sound like a psychopath with my answer. Infested is an intense book with a truckload of violence. But, and this may be the part that gets me uninvited from my high school reunion, I actually have no problem writing that stuff. In fact, it’s quite fun—dare I say, therapeutic?—to build such levels of mayhem. No, the violence, gore and general depravity gave me no problems when drafting. The real hard part, being a life-long introvert, was the dialogue. It’s one thing to describe the nightmare, but another thing completely to have two people talk about it.

If you found yourself in this book do you think you would make it out alive?

Definitely not. I would likely be one of the first to go. And really, I’d probably be happier for it. The waiting would be so stressful.

Where can we find you? List your links and let us know any in person events people can find you at!

I miss events so much! Luckily, they are returning. I usually attend one or a two a month, but that was in the past times, in the Great Before, now I’m probably only going to make a few over the entire summer. The best way to find out where I’ll be is my website ChristianLaforet.com.

Besides my website, you can also find me at these various places.

What is one underappreciated indie horror author we should all check out?

Great question! There are so many! Gah! Okay, if I have to just say one, then I’ll give the nod to Hailey Piper. I’ve only recently discovered her, but have greatly enjoyed her work and look forward to more.

Writing in a pandemic. Has it changed the way you write? Has it made an impact on your voice?

Yes and no. Jeez, I should be a politician! Yes, it has in that I used to write with a couple of other authors almost daily. We would meet at the coffee shop, talk writing for a bit, then get down to business. Obviously, that ended. However, the answer is also no, because the actual act of writing, for me, is a solitary experience. Even meeting with my friends, once the headphones went on, I was thrust into my own little universe.

The pandemic did make me more introspective though. I suddenly found myself questioning the need for horror novels when the real world seemed to be falling apart, which in turn cast a big, dark cloud of doubt above my own writing. Thankfully I got over it, but it was a real thing for a bit.

Besides horror, what is your favourite genre to read?

Easy. Science Fiction. I have some great sci-fi stories rattling around my skull. I’m a fan of crime stories as well. Dirty, gritty tales of illicit behaviour and hard-boiled revenge. Yeah baby!

Tell us about the first piece of writing you had published and how that impacted you?

My first published story appeared in a local, quarterly magazine. I was surprised to be included since the publication leaned more towards poetry and literary fiction than genre fare. I think that was the first time I truly felt like I could write. Until that moment, I was pretty sure that my friends and family had just been blowing smoke up my butt. Unfortunately, there was a down side to the whole experience. It was a paid gig, but the publisher stiffed me on it. They actually went out of business shortly thereafter, so I guess I got the last laugh.