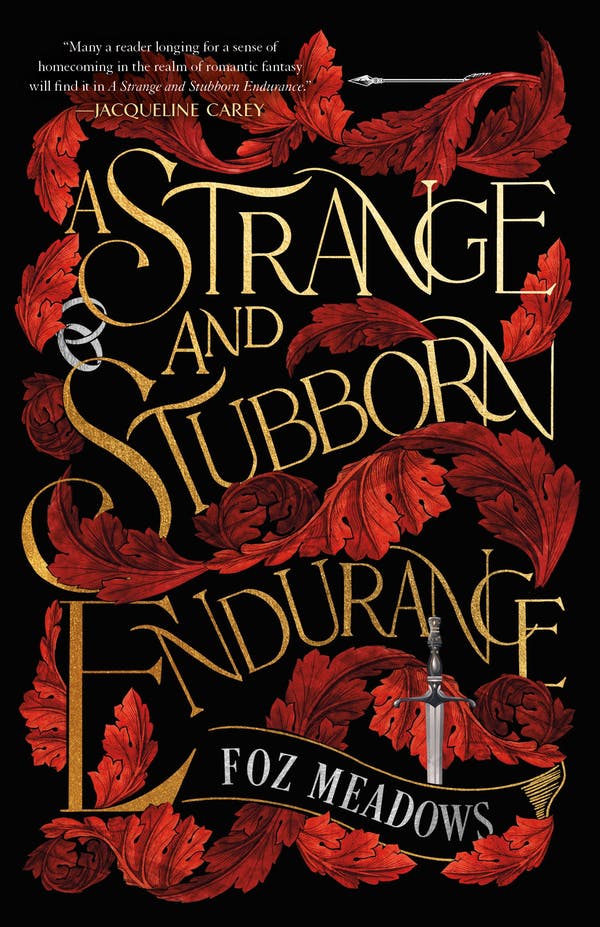 “Stolen me? As soon to say a caged bird can be stolen by the sky.”

Velasin vin Aaro never planned to marry at all, let alone a girl from neighboring Tithena. When an ugly confrontation reveals his preference for men, Vel fears he’s ruined the diplomatic union before it can even begin. But while his family is ready to disown him, the Tithenai envoy has a different solution: for Vel to marry his former intended’s brother instead.

Caethari Aeduria always knew he might end up in a political marriage, but his sudden betrothal to a man from Ralia, where such relationships are forbidden, comes as a shock.

With an unknown faction willing to kill to end their new alliance, Vel and Cae have no choice but to trust each other. Survival is one thing, but love—as both will learn—is quite another.

Byzantine politics, lush sexual energy, and a queer love story that is by turns sweet and sultry, Foz Meadows’ A Strange and Stubborn Endurance is an exploration of gender, identity, and self-worth. It is a book that will live in your heart long after you turn the last page.

When I read the line ”arranged marriage meets queer fantasy romance,” I never placed a review request so fast before. The juxtaposition of a culture of repression to one of acceptance set up the foundation for a plot rich in mystery and political intrigue. I would recommend this for anyone who enjoyed “Winter’s Orbit” by Everina Maxwell, also published by Tor in 2021. Tor is understanding what readers want. Written in an elegant prose, A Strange and Stubborn Endurance features a world rich in depth and filled with lush descriptions that readers will melt over.

As with the culture, the characters are juxtaposed against each other and you’ll find an exploration of healing and self-worth. I mentioned in my content warnings that there is a sexual assault within the story. It is the inciting incident and occurs very early. I do wish we could get to a point where sexual assault isn’t used to set the characters onto their character journey. There is a journey of healing following the assault, and the character does have to face his abuser at least two times afterwards, if I am remembering correctly.

I really enjoyed the relationship that developed between Velasin and Caethari. There is a forced proximity aspect that helped to facilitate communication and in turn friendship and trust. Another addition that I loved was Velasin’s valet, Markel. He communicated primarily through sign and it’s not something usually done in books. The place that Caethari was from welcomed kemi– third-gender souls who possessed an identity beyond male or female. I loved how open and welcoming Caethari’s homeland was compared to Velasin’s.

The plot was faced paced and at times, the characters didn’t have a chance to slow down. There were periods of time when I felt the plot worked like this: something bad happened, Velasin and Caethari were informed, no one saw how it happened, they went to investigate, and this cycled through a few times. At one point, they always seemed to be reacting instead of being able to be proactive.

A Strange and Stubborn Endurance was full of secrets, political intrigue, scheming, and machinations. Despite being wrapped up in the twists and turns, I was able to figure out the main villain and the reason for said villainy about 25-30% into the story. This was minimal magic use, but the magic used was some of the more interesting details. For the sake of avoiding spoilers, I would have liked to see it explored and fleshed out a bit more. By the end, there were one or two things that were never brought up again despite being mentioned a few times, such as the rosewood chest– I really need to know if Velasin ever retrieved it. The descriptions of the clothing and food were some of my favorites, and I wish I could have some of those little suns myself. Thanks again for the opportunity to read and review!

Foz Meadows is a queer Australian author, essayist, reviewer and poet. They have won two Best Fan Writer awards (a Hugo Award in 2019 and a Ditmar Award in 2017) for yelling on the internet, and have also received the Norma K. Hemming Award in 2018 for their queer Shakespearean novella, Coral Bones. Their essays, reviews, poetry and short fiction have appeared in various venues, including Uncanny Magazine, Apex Magazine, Goblin Fruit, The Huffington Post and Strange Horizons. Foz currently lives in California with their family.