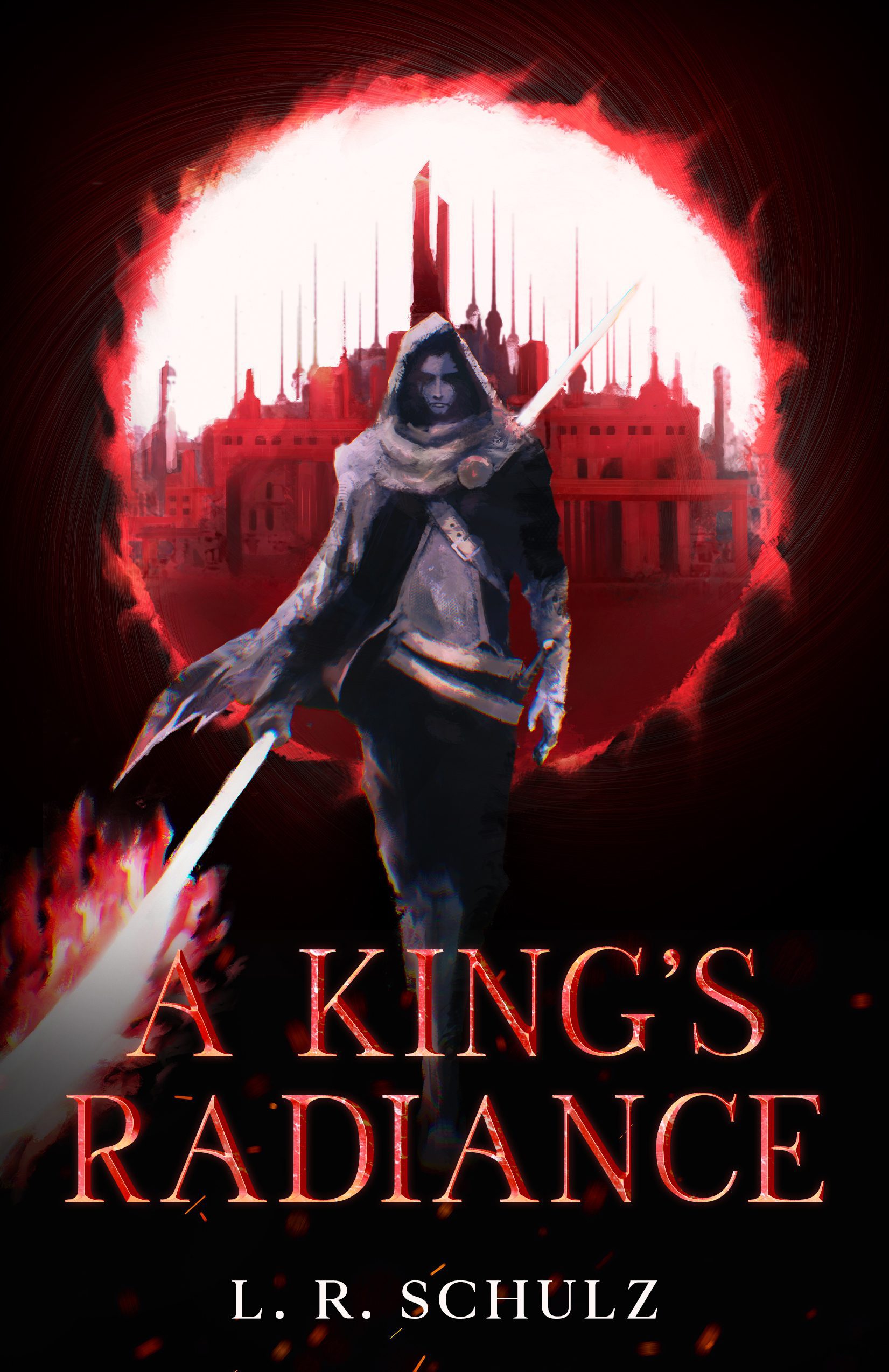 Three siblings… a rebel, a prince, a prisoner

The sun’s light shines bright over the land of Zapour, and only a select few can harness its power. But all power comes with a cost, and the world is not kind to those who refuse to pay it.

Raiz Glaive, a strong shine wielder, was born into royalty, though even royals have to answer to someone. When the King-Radiant sends one of his precious underlings to the Kingdom of Trost, Raiz quickly learns who holds the true power in the realm. After his sister is taken prisoner simply for having the violet eyes of a mystic, Raiz swears vengeance. But when an unwilling father stands in his way, Raiz promises to take revenge into his own hands.

Dazen Glaive remains heir to the throne of Trost, and a sworn defender of the King-Radiant, but he has not forgotten what happened to his sister, and will not forgive their cruelty.

Forced to be the centerpiece of her “master’s” twisted human art gallery, Isha remains a prisoner. Though she has not lost hope. Finding friends among fellow captives, she begins to formulate a plan for escape. Though what she discovers has a much more sinister bearing on the fate of all of Zapour.

A Kings Radiance is a wonderful journey of three siblings, separated at a young age, seeking to find each other and save their kingdom from those meant to protect it. Each individual dealt with their own struggles as one was learning to be his kingdoms future king, another stolen away and made to become a slave because of her unique eyes, and the last broken by guilt so he seeks his revenge by becoming an outlaw. Ultimately, this novel is about love, forgiveness, and breaking the chains of cruel leaders. Schulz has done an outstanding job with this intro into the land of Zapour.

There are many things to love about Schulz’s novel A Kings Radiance. It is filled with a unique magic system called Shine where those born with the gift can harness the power of the sun as a weapon or even as a way to make art. There are also many interesting secondary characters that keep the story humorous or perhaps give you someone to hate and a reason to turn the next page. You will also find three POVs that I really loved bouncing back and forth between. Each one had such a unique life that really helped keep my attention and made me fall in love with these siblings.

As you can probably guess from what I’ve mentioned already, Schultz’s character development throughout the story really was beautifully told. Not just with the main POVs but with their friends as well. You can really feel their past and how it weighs down on them yet you get to watch as it molds and shapes them into something new. I mean I even fell in love with a lizard if that says anything!

When it comes to world building I think Schulz definitely focuses more on the characters rather than the world they live in. Of course this is not a negative thing. He still manages to build little mini worlds around each of his characters that have enough detail to make it feel real. My only complaint is that I did struggle with understanding the geography of this world while reading. I think if I had been reading a physical copy with the map it would have helped but since I was reading the ebook I didn’t do that as regularly. Now that’s an idea! A map button while reading an ebook that lets you toggle the map on and off..

When it comes to the plot of the story I really enjoyed the journey. There were elements that I found predictable but there were others I legitimately found surprising! Sometimes I also felt like there were hints intended to be suttle that were fairly obvious to me so that took a little of the fun out of certain elements. However, if you are looking for a fun plots that takes elements from tropes like heists, mentor and mentee, found family, and save the kingdom from an evil ruler, then this is definitely a story you would enjoy.

When it comes to the writing style I found it very approachable and easy to read. In a way Schulz’ style comes across on the lighter side of fantasy. What I mean by that is there was a lot of humor and overall the emotional weight felt lighter. This did make some of the more serious moments feel a little cheesy but that may have just been me. (Definitely more towards Sanderson style and less Abercrombie if that helps!) Schulz way of writing actions scenes made them really fun and I enjoyed picturing light weilders using their shine to just absolutely destroy the bad guys!

Some of the main themes in this novel were questions like: what is family bonds worth? Where should loyalties lie? Do the means justify the ends in every situation? Is it better for the few to take on the weight of life for the many or should the many stand up for the few? You’ll also find ideas like love, friendship, fatherhood, loyalty, revenge, slavery, and justice. Not to mention there is also a mute and a duoplegic (can’t move either arm) who have high secondary character roles!

A Kings Radiance was a fun adventure with great characters and an exciting ending! I can’t wait to read book 2 and see how the outcome of their decisions effect the world of Zapour! You should give this one a shot!

Thanks Escapist Book Tours for letting me participate in this tour! It was a very enjoyable one!