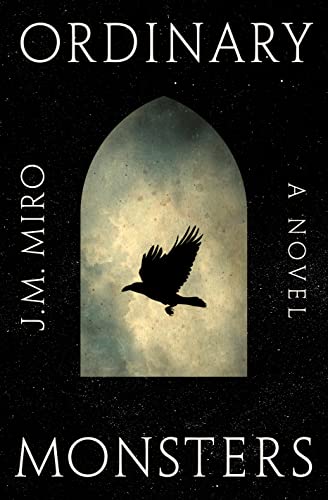 England, 1882. In Victorian London, two children with mysterious powers are hunted by a figure of darkness —a man made of smoke.

Sixteen-year-old Charlie Ovid, despite a lifetime of brutality, doesn’t have a scar on him. His body heals itself, whether he wants it to or not. Marlowe, a foundling from a railway freight car, shines with a strange bluish light. He can melt or mend flesh. When two grizzled detectives are recruited to escort them north to safety, they are forced to confront the nature of difference, and belonging, and the shadowy edges of the monstrous.

What follows is a journey from the gaslit streets of London, to an eerie estate outside Edinburgh, where other children with gifts—the Talents—have been gathered. Here, the world of the dead and the world of the living threaten to collide. And as secrets within the Institute unfurl, Marlowe, Charlie and the rest of the Talents will discover the truth about their abilities, and the nature of the force that is stalking them: that the worst monsters sometimes come bearing the sweetest gifts.

With lush prose, mesmerizing world-building, and a gripping plot, Ordinary Monsters presents a catastrophic vision of the Victorian world—and of the gifted, broken children who must save it.

I wanted to thank the publisher for an advance reading copy for review consideration in exchange for an honest review, this had no bearing on my thoughts or feelings.

This book has incredible prose and atmosphere. It would classify it as historical-gaslamp-urban-horror-fantasy (yes that’s obviously a thing, trust me). The horror elements aren’t in your face and gratuitous but they do add to the overall setting of the story. I mean a secret school in the Scottish highlands with magical children is inherently kind of creepy, is it not?

“Scared is just your head telling your heart to be careful. It’s not a bad thing, it’s what you do with it that matters”

This premise initially reminded me a bit of Miss Peregrine’s Home for Peculiar Children, as the entire concept surrounds children and people with “Talents” being collected. There they learn math, science and geography but also how to master their Talents. There are five main classifications of Talents but each child is still fairly unique.

One of my favourite lines comes from when the children are learning about Darwin’s Theory of Evolution (which is a recent theory given the time period):

“And what then are monsters? Monsters are mutations that don’t lead anywhere, they’re too extreme to be replicated.”

The idea that we’re always one genetic mishap away from a monster, is very interesting. And I think this is then where the title of the book comes from because the people with Talents are then “Ordinary Monsters”, they’re not grotesque beings simply humans with extraordinary abilities. I always love that moment in a book where you realize why the title is what it is.

I read this book via audiobook and I enjoyed the narrator’s performance. There are characters from England, America and Scotland and each accent was done really well. This book is quite long, at nearly 700 pages physically and over 24 hours on audio, it’s an investment.

I will say that at times, the pacing lagged and I was waiting for more progression in the plot. If you’re looking for heavy action, this maybe isn’t the book for you. If you’re looking for a slow burn book with an unfolding plot with layers to it, then I’d suggest it. The conclusion tied things up enough that I was satisfied with the ending but there are enough threads still to propel the trilogy forward.

Overall, this isn’t a new favorite but it’s well-written and a great book and I’ll definitely keep it on deck for suggestions for people who are on the hunt for this type of book. I’ll also definitely be on the lookout for book two release information.