Banebringer by Carol A. Park

First, big thanks to Carol Park for sending me a review copy of Banebringer in exchange for an honest review! We appreciate review copies at fanfiaddict.com and David and I do our best to review as many as we can. We love finding new books to recommend and it’s fun to dive into something new. Banebringer is the first book of The Heretic Gods trilogy and Park’s self-published debut novel. The story is centered around two POV characters, Vaughn and Ivana.

Vaughn is a banebringer. Banebringers are people who have been cursed (or blessed, depending on how you look at it) with supernatural powers. The pros? Banebringers can burn off their own blood to conjure flame, create illusions, become invisible, and many more powers specific to each different banebringer. Vaughn’s powers involve invisibility and power over water. Some banebringers like Vaughn choose to collect their blood for later use, drying it into a silvery powder known as aether. There is a downside to this power, though. When a banebringer dies, a portal to the “other side” opens, and the horrors that live there can come through: giant bloodthirsty abominations with no motives other than killing.

“The monster pushed its way through the tear, piece by terrible piece. Its frame was indistinct at first, edges licking backward into the tear like blurry flames, but the more of it that came through, the more concrete the details became.”

Though his nature may be monstrous, Vaughn is anything but. Kindhearted and gifted with a glib tongue, Vaughn seeks to distance himself from his nature by hunting bloodbane. Vaughn himself is often more hunted than hunter, though. His own father, Ri Gildas, is out to catch Vaughn and deliver him to the Conclave, a priesthood that sedates and destroys banebringers. Life on the run is hard, but Vaughn bears it with a smile.

Ivana often goes by the name of Sweetblade. After all, an assassin is only as good as her nom de plume, right? Ivana and Sweetblade are two sides of the same coin. Ivana is curious, caring, and protective, while her personality as Sweetblade is all cool detachment, businesslike and ruthless if the need arises. Though she often hides behind the mask of an assassin, Ivana has a caring heart. She operates an inn that only employs unwed mothers, giving them a purpose in a society that throws them by the wayside. Ivana has a history, one that she’s buried deep. And it involves Ri Gildas, Vaughn’s father and ruler of Ferehar.

“If anyone could afford quadruple the cost of hiring an assassin to murder a Ri, it would be the Ri of Ferehar. Ivana closed her eyes. No. No amount of money could tempt her to take blood money from that man.”

Through extenuating circumstances, Vaughn and Ivana cross paths – one running from his murderous father, the other out for her own taste of vengeance. Can a black sheep banebringer and a deadly assassin escape the most powerful man in the country without killing each other first?

Banebringer was a good read. It took me a long time, though I think that was because I was listening to Kings of Paradise at the same time. And, since it’s the holiday season, there’s everything in the world to do with very little time to do it!

What I liked most about Banebringer was the push and pull between Vaughn and Ivana. Their character interactions were funny and smart. I like how Vaughn was always trying to peek beneath her mask (among other things), and I like how they worked together when there was a problem to solve despite Ivana’s standoffishness. Park has a wonderful gift for character voice, and it’s displayed on every page of Banebringer.

I also enjoyed Banebringer’s magic system. All of the banebringer powers were really interesting, and it was cool how banebringers’ enemies often have to deal with either a) facing a dangerous magic-wielding banebringer or b) killing the banebringer and being forced to fight the resulting bloodbane that appears.

I felt like Banebringer struggled with spatial flow. At times, I felt like I got whiplash as time passed or as characters were moving through buildings. I also think that the ending was really cool, but would have been cooler had it been another 20 or so pages of really fleshing out the staging for the final scenes, the plan, and the characters’ roles in the plan. Staging, foreshadowing, and linking scenes together could be better. There is also one reference to self-harm in this book, which is another part I didn’t care for and don’t feel fit the tone of the story nor did anything significant for the character in question. That being said, it’s a very small part of the book and probably wouldn’t be a big deal for most readers.

That being said, I enjoyed reading Banebringer and found it worth my while. What I want to know more about is the world at large. I suspect this will come up in future novels. Who exactly gives the banebringers their powers? What makes the bloodbane come through the tears between worlds when a banebringer dies? And I want to see more bloodbanes! But that’s what sequels are for.

I also want to know more about Ivana and her past. There are some definitive answers in Banebringer, but I still have more questions. Fortunately for me, I went browsing around the internet and learned that my questions might soon be answered! 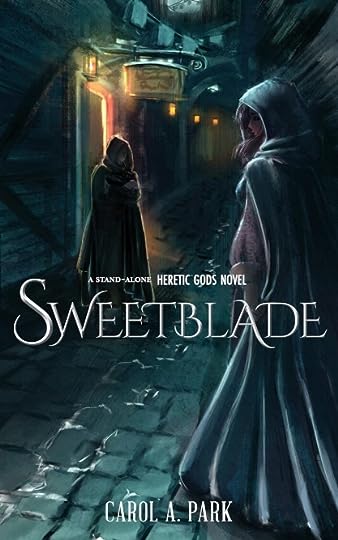 Sweetblade is a stand-alone Heretic Gods novel all about Ivana and her past, set before the events of Banebringer. If you enjoyed Banebringer, check it out on December 28th on carolapark.com. I’m looking forward to it!