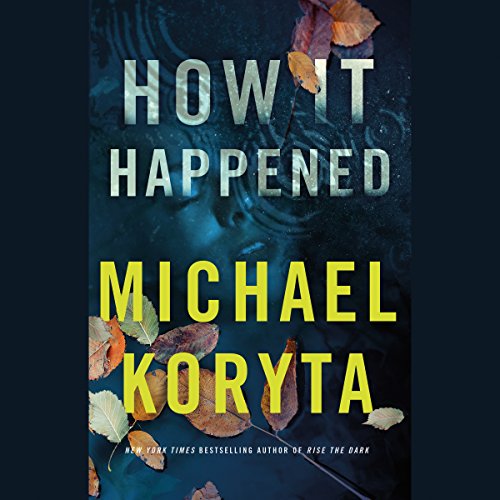 First off, I want to thank Hachette Audio for the ALC of How It Happened. This listening copy was given to me in exchange for an honest review on my blog and in no way impacts my views on the novel.

Kimberly Crepeaux is not a good person. The list goes on for the regrettable things she has done in this life but confessing to her role in the murders of Jackie Pelletier and Ian Kelly isn’t one of them. Too bad no one will listen to her because of her past lies and her inability to clean herself up.

At least, that is until FBI Investigator Rob Barrett shows up. This circus has consumed him for months and he believes every heroine-induced, bloody detail that slides off Kimberly’s lips. But when the victim’s bodies are found 200 miles away from where Kimberly said they’d be, gunshot wounds to their backs and DNA that doesn’t match his suspect, Barrett is forcibly reassigned.

Unable to get the case off of his mind, and with Kimberly continuing to show up in his life, Barrett decides to risk it to find out exactly how it happened.

Though I did find the book a tad slow in some spots, it is a definite page turner. It is a slow burn that speeds up in all the right places and keeps the reader engaged throughout. You’ll come for the whodunit and stay for the character development. Though this is my first Koryta book, I can tell he has a knack for creating characters the reader will be drawn to and feel invested in. Though Kimberly is no straight shooter, Oh My Lanta did I feel terrible for her. Sucks to suck being the person that has all the answers and no one to trust in.

Robert Petkoff did a fine job on the narration with perfect pacing and great voice inflection. My only disappointment was that Christine Lakin only performed the intro to the book, giving breathing life to Kimberly and setting the stage for her character and the story, only to hand the reigns over to Petkoff for the rest of the novel. I feel like I would’ve enjoyed the story even more had Lakin been more involved.

All in all, How It Happened is a non-stop, drug laden ride into rural Maine that will have you on the edge of your seat until everything comes crashing down. Koryta is one to keep on your reading radar.